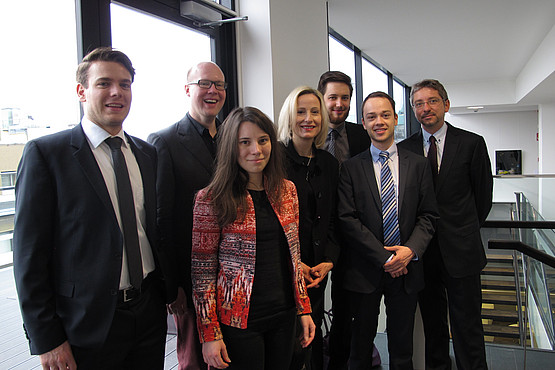 On 27 and 28 February 2015, the Vis Moot Court Team of Graz University (Ms Natalie Schadler, Mr Lukas Klever and Mr Hannes Joebstl, with the generous support of its sponsors (Dekanat, Büro für Internationale Beziehungen, ÖH, as well as the law firms Kaan Cronenberg und ARP), had an opportunity to participate in the „Helsinki Pre-Moot“, which is a competition organized by the Faculty of Law of Helsinki University (Mr Santtu Turunen) and the firms Castrén & Snellman, Hannes Snellman and Roschier in order to prepare the students for the Willem C. Vis Moot, which is to take place in Vienna from 28 March 2015 to 2 April 2015.  The students were accompanied by Prof. Nunner-Krautgasser and Prof. Aschauer, who acted as arbitrators at the Pre-Moot, as well as Mag. Mayrhuber as coach.

As a matter of tradition, many highly regarded teams use to attend the Helsinki Pre-Moot. In 2015, the teams from Luigi Bocconi (Mailand), St. Gallen, Humboldt (Berlin) and King’s College (London) were among the participants. It is all the more satisfactory that the speakers from Graz were at a comparable level; at the end of the first day, they were even ranked among the 6 strongest teams (out of 15). On the second day of the competition, however, the speakers did not prevail over Humboldt, which was to become the winner of the competition; as a consequence, the team was not ranked among the 5 strongest teams, which were Humboldt, Luigi Bocconi, Turku, Stockholm and King’s College (only the 5 strongest teams are communicated).

During the competition, the speakers were able to sensibly improve their oral presentations. They could take advantage of the feedback given by arbitrators immediately after the rounds, and by advice given from fellow speakers (whereby Graz established working relations with Luigi Bocconi and St. Gallen). Most importantly, the students could test themselves through challenging questions put to them in the course of the oral arguments.

One of the coaches from Graz (Professor Aschauer) was assigned the honourable task of sitting as an arbitrator in the final round of arguments, together with a partner of Hannes Snellman (Niklas Lindström) and the General Secretary of the Arbitration Institute of Finnland (Heidi Merikalla-Teir). The (unanimous) winner of the Pre-Mot was, as mentioned, Humboldt University. Our best wishes go to the panelists from Graz who will attend further Pre-Moots in Belgrade and Moscow on their own initiative in the coming 2 weeks.

Approximately 130 participants of the Helsinki Pre-Moot 2015 took part in the evening seminar at the University of Helsinki in Porthania building on 26 February 2015.

The Topic of the panel discussion was “Non-Signatories in Arbitration – Taking Consent Seriously?”. The panel was moderated by Heidi Merikalla-Teir, the secretary general of the Finnish Arbitration Institute. The panelists were Viktor von Essen (ICC, Paris), Tom Pröstler (CMS, München) and Pascal Hachem (Bär&Karrer, Zurich).

The seminar was organized by Young Arbitration Club Finland, in cooperation with the law firms organizing the Helsinki Pre-Moot (Castren&Snellman, Hannes Snellman and  Roschier).